Powdery mildew can be an unsightly problem on our plants. Here we will look at what it is, and how to prevent and manage it.

Powdery mildew is most often seen in mid to late autumn on our squashes and pumpkins. It usually affects the leaves and stems, but sometimes extending to the fruits too. A number of other plants are affected by powdery mildew. These include tomatoes, legumes, potatoes, fruit bushes and trees and flowers.

It looks like a thick layer of white or grey powder (hence the name) over the leaves.  Starting with small white spots, and then spreads to cover the leaves. It does not concentrate around the veins and its distribution over a leaf is completely random. It is easy to differentiate from the perfectly healthy and normal silvery patches that develop around the veins of a mature courgette plant.

It’s uncommon to go through a year growing squash and pumpkins and not encounter some powdery mildew. Small amounts aren’t too much of a problem but can be a sign that you need to alter the care of your plant a little.

It’s important to note that whilst powdery mildew affects a lot of different plants, each species of the mildew is host-specific. This means that a powdery mildew on a one plant will not hop over to your other crops and affect them too, although it is possible for them to encounter it through airborne spores from elsewhere.

What is powdery mildew?

It is a fungal infection that affects the surface of a plant. In other words, it does not go inside a plant like other fungal infections (such as blight) which can quickly move through a plant killing it off. Powdery mildew is a lot easier to control and a lot less damaging to our plants as a result.

However, as it spreads and covers more of the surface of a plant, it will start to interfere with a plant’s ability to photosynthesise. In severe cases, the plant’s growth can be slowed and subsequent yield affected.

Usually, it will affect older leaves, or leaves that are dying off towards the end of the season anyway. In these cases shouldn’t be regarded as too much of a problem.

The reason that it often affects squash plants is primarily because the species of powdery mildew affecting squash is one of the most common. The leaves of squashes are also coarse and hairy, which helps trap a layer of humidity around the leaf.

The coarse leaves also mean that the fungi can “stick” easier and are less likely to be washed off the leaf before they establish themselves.

Prevention is better than cure

As with most things, prevention of powdery mildew is better than cure. There are a few things that we can do to reduce the chances of having a severe attack of powdery mildew, but there is very little that can be done to prevent it entirely.

Chemicals are not the answer

Gardens are fragile ecosystems, that if we look after will grow us healthy and productive plants. If we are adding things such as chemicals to our gardens, we can upset the natural balance. This will end up depleting the overall health of your garden over time.

There are sprays, chemicals and organic treatments available on the market for fungal problems such as powdery mildew. Most of them are not effective at treating powdery mildew once it has appeared. Instead, they act as a preventative measure.

These chemicals – organic or not – are designed to interrupt the growth of fungi; a very beneficial organism in our gardens. Not only are these treatments not very good at their job, but they can also create soil that is toxic for fungi, which would be a terrible thing for our plants!

We know that powdery mildew thrives in warm, humid conditions, and is more likely to affect weaker, old leaves.

Plants are constantly losing water through tiny pores in their leaves. This is a process called transpiration. The water lost from the leaves creates a humid zone around the plant. This means that on warm, sunny days the humidity is likely to be worse than on cooler, dry days.

To reduce humidity, make sure that there is plenty of air flow around the plants. Give them sufficient space to grow and remove old leaves to open the plant up.

In addition to improving air flow, create optimum conditions for growth. Where a plant is healthy and growing well, we can expect to see less powdery mildew. If we do get it on a healthy plant in good growing conditions, it is far less likely to affect the plant’s growth. And therefore your crop.

How do I get rid of powdery mildew?

Firstly, we shouldn’t worry too much when we see powdery mildew. It is very common and whilst unsightly, it is rarely a problem for our plants. So, to an extent it should be tolerated.

It is good practice to remove heavily affected leaves. If you see the first signs of powdery mildew, do what you can to increase airflow. And ensure that your plant is well watered. The first signs are a few random white “fluffy” looking spots. Also, ensure that you do not remove too many leaves as this will affect the plant’s growth more than small amounts of mildew.

Water at the base of the plant. Do not get too much water on the leaves, which could create more humidity. Well-watered plants are more able to out-grow powdery mildew and less likely to become overcome by it. Healthy, strong plants should produce a good crop despite the presence of mildew.

Do not be tempted to “wash” the leaves, regardless of what advice you may be given. Remember that it is not a huge problem and that putting anything on the leaves could create conditions where mildew thrives or could spread its spores.

Will powdery mildew go away on its own?

No. It will not go away on its own. If left, there is a possibility it could get worse. But, if conditions around the plant, such as weather conditions improve, it might not spread. If you do not have much,and it is not spreading, try not to worry.

It is fine to compost mildewy leaves and the problem will not live on in the soil, so there is no need to avoid growing plants in the same spot next year! 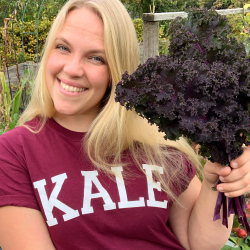 Becky Searle
Becky Searle is an Ecologist, Botanist and Kitchen Gardener. She has a passion for sharing her knowledge of ecology in relation to gardening. Becky is a freelance garden writer and can be found on all social media channels as Sow Much More.

a gardener, homesteader, author and video creator. Together with my husband, Mr J, we share our journey to self-sufficiency. Growing vegetables, fruit and herbs, as well as flower gardening, and living a more sustainable life.
Read more...

For news, information and upcoming extras!