What seeds can I sow in June? Well, there are masses of seeds to plant in June, so I’m going to do a quick run through some of them and you can also sow most of the seeds I talked about for sowing in May.

As always I’ll start by reminding you that you need to adjust your sowing times according to where you live. For most areas in the UK, June is a great month for sowing all the tender plants that you want. In other parts of the world – it’s just warming up in the northern states of America. For most southern states in America, it’s probably getting too hot to grow a lot of these and you’ll need to wait until later in the year. And in Australia, as the weather cools down, now would be the time to sow the more leafy vegetables that won’t grow in the summer heat.

We garden in Southeast Wales in the UK. That works out equivalent to the US hardiness zone 8b. However that’s only an approximate guide to the lowest temperatures that we get in the in the winter. It doesn’t describe the micro-climates here. We have a really nice, mild micro-climate here. Certainly we are very fortunate that a lot of our plants flower very early and they grow until quite late in the season.

Let’s start with beans. You can sow runner beans and French beans direct into the ground. We like a runner bean variety called Greek Gigantes from Real Seeds. I will sowing a dwarf French bean, this one’s called Purple Teepee. I’ve also sown a yellow bean called Sonesta. And I’m also growing some climbing French beans called Neckergold. To keep a succession of beans to pick throughout the summer, I will sow the Yin-Yang beans towards the end of the month. It is also a dwarf bean.

All the seeds that I’m talking about today can be direct sown into the ground and the next one is beetroot. Chioggia has a pink and white candy strike when you cut into it. Romano is a dark red one, but I also grow Boltardy and Cylindra and towards the end of June I will sow some more.

If you haven’t already sown leaf beets you can put those in now but you can also sow them for successional planting. I grow a lot early leaf beet because I like to use them as salad and I also use them in veg boxes.

You can sow Calabrese seeds. Now Calabrese is a broccoli, it’s the one that we buy in the supermarkets with the big heads of big florets as opposed to broccoli which has the long thin smaller florets and you get multiples of them on each plant so Calabrese is a really nice fairly quick growing brassica I’m going to get this in now we’ll be harvesting it by the end of summer and early autumn.  I’m going to make two sowing’s of Calabrese one now and one in about three weeks time just to stagger the harvesting because I don’t want masses of Calabrese to come all at once I want to be able to harvest it over a longer period.

Carrots can also be sown I’m going to put in some yellow and some purple carrots this week and then in about three weeks time I will sow a couple more rows of something like a Chantenay Red Cored so that I can keep on harvesting the carrots right throughout the year.

Now is good time to sow Chinese cabbages and Kohlrabi I’ll be doing a couple more sowings of kohlrabi. I did some earlier in the year and quite a few of them have been nibbled by slugs and I do want to have some so I will be sowing some more.

Another group of seeds for June are cucumbers, courgettes and marrows. I grow variety called Spacemaster 80 I really like it because it grows to about three feet tall, so it’s a compact plant. The cucumber fruits grow to about six to eight inches long, which is ideal for just the two of us in our kitchen. The courgettes I’m growing this year are called Gold Rush, Nera di Milano and Greenbush.

Courgettes, cucumbers, marrows and squashes start by sending out one rounded leaf, which is the seed leaf and then they start to send out their true leaves. If you want to know which direction the plant is likely to eventually grow in, whichever way the first true leaf comes out they seem to grow in the opposite direction. Please don’t hold me to that, but that seems to have been our experience here.

Sow for continuity of harvesting

Peas can be sown direct into the ground. I had a huge envelope of seeds – there’s very few left, but I will sow those. For an early harvest I sowed some peas under cover in the polytunnel in the middle of March. They are now producing masses and masses of Mange Tout. I can’t pick them fast enough. My lesson is I need to stop sowing quite so many and just so fewer pea seeds at a time and more often.

Radishes are a really quick and simple crop to grow. Seed to harvest takes about three to four weeks. I have a variety of seeds here for different colour radishes. There’s the one that we all recognize as what I call a Peter Rabbit radish. There is one that’s slightly different, it’s got less white on the end. Also a red globe shape and likewise there’s a little white one. One has a white outside and a pink centre. I’m interested to see what that will be like, so we’ll come back when I harvest them. Finally, I found this one I called Viola and is purple in colour. I won’t be sowing many of these at any one time because there is such a wide variety of them.

More veg seeds to sow mid-May to the middle of June are Swedes (Rutabaga). I didn’t have much success with them last year. I think I planted them too late and didn’t water them enough. This year I’m going to be trying a variety called Wilhelmsburger. Fingers crossed that I have more luck with my swedes this year.

You can also sow Purple Sprouting Broccoli now this is to harvest next spring and others particularly during the hungry gaps or a really valuable ones or so I’ve got some in the ground that I sowed earlier in the year to give me a harvest before Christmas hopefully so in some now means that I should be able to harvest in February March and even going on into April.

You can sow sweetcorn direct into the ground. They come up looking like a blade of grass and then it doesn’t take very long before they romp away.

Both summer and New Zealand spinach can be sown in June. I have a variety called Medania. We don’t grow it for the mature leaves, however I do grow it for the baby leaves. I sow little and often. Harvest by cutting off the young leaves and I can harvest three or four times. That gives enough time for the next sowing of seeds to get to the point where it’s ready to harvest.

You can also sow turnips. I’ve tried Sweet Marble, but it’s an F1, so I can’t collect the seeds from it. It’s very nice, I like the taste. I will also sow one called Goldana. I’m not sure how different the varieties taste, so this year I can do a comparison.

In very hot and dry weather, I create a drill and water the drill before I sow the seeds. This way there’s some moisture below them and then giving it a light water once I’ve covered them over. I don’t want all of those seeds to start germinating and then dry out because of lack of water. So to start off with I am trying to keep the seed beds moist.

Once they’ve germinated I’ll give them one more water and then I’m just letting them get on with it. This will make those little plants put down a really good root system as its searching for water at a lower level and that gives a stronger healthier plant.

And so, wherever you are in the world and whatever you’ve got planned for today, I hope it’s good one and I also hope you’ll join me again next time.

You can watch the video of What to Sow in June here. 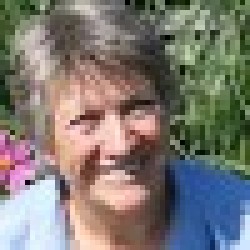